Demand that your representative support the impeachment of Donald Trump 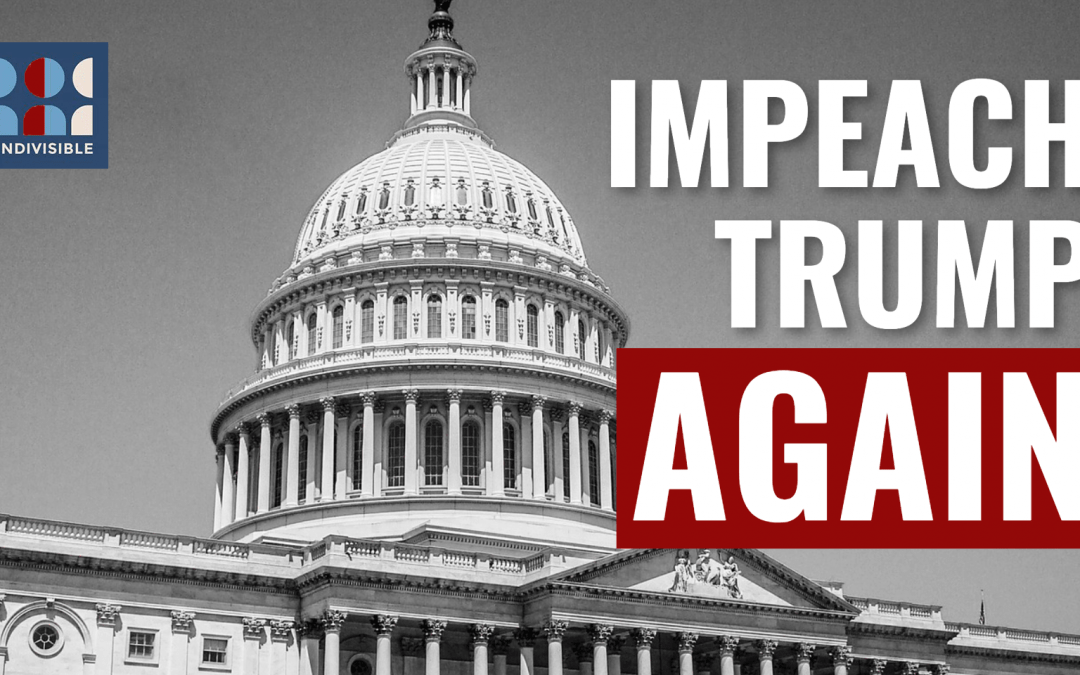 Brought to you by Indivisible Guide

Donald Trump has spent the last four years doing everything in his power to destroy our democracy and its institutions. He has used the office of the presidency for his own personal gain and profit. He has not once, in his four years in office, shown an interest in running this country, except to the point that it might benefit himself, his businesses, or his own corrupt family.

When white supremacist forces supported Trump’s racist rhetoric and actions, he not only refused to condemn them, he called them “very fine people.” When he decisively lost his re-election bid in November 2020, he refused to concede. Instead, he called up state officials in Georgia to demand that they overturn Joe Biden’s legitimate victory in that state. His enablers in the Republican party allowed him to live in denial, all while whipping up their base to believe the fiction that the election was “rigged” and had been “stolen” from Trump. And on January 6, 2021, when the 117th Congress met to certify the election of Joe Biden to the presidency, the consequences of Donald Trump’s racism, corruption, and unhinged denial broke down the doors.

Thousands of Trump supporters, some of them apparently armed, overtook the Capitol and put the Vice President, U.S. Senators, and Representatives in the House in mortal danger. Trump stood by and said nothing for hours, before finally posting a video proclaiming to the insurrectionists who were occupying the Capitol that “I love you and you are all very special.”

This treasonous behavior cannot go unpunished. Donald Trump must be impeached, again. The House of Representatives must draw up articles of impeachment immediately and move quickly to vote on them and send them to the Senate for a speedy trial, where he must be convicted and disqualified from ever holding federal office again.

Hi, this is [NAME] from [CITY], a constituent. Get Trump our of there now, he is a danger to the country. Impeach him as fast as you possible can, then get Murray and Cantwell to do the same. Thank you.